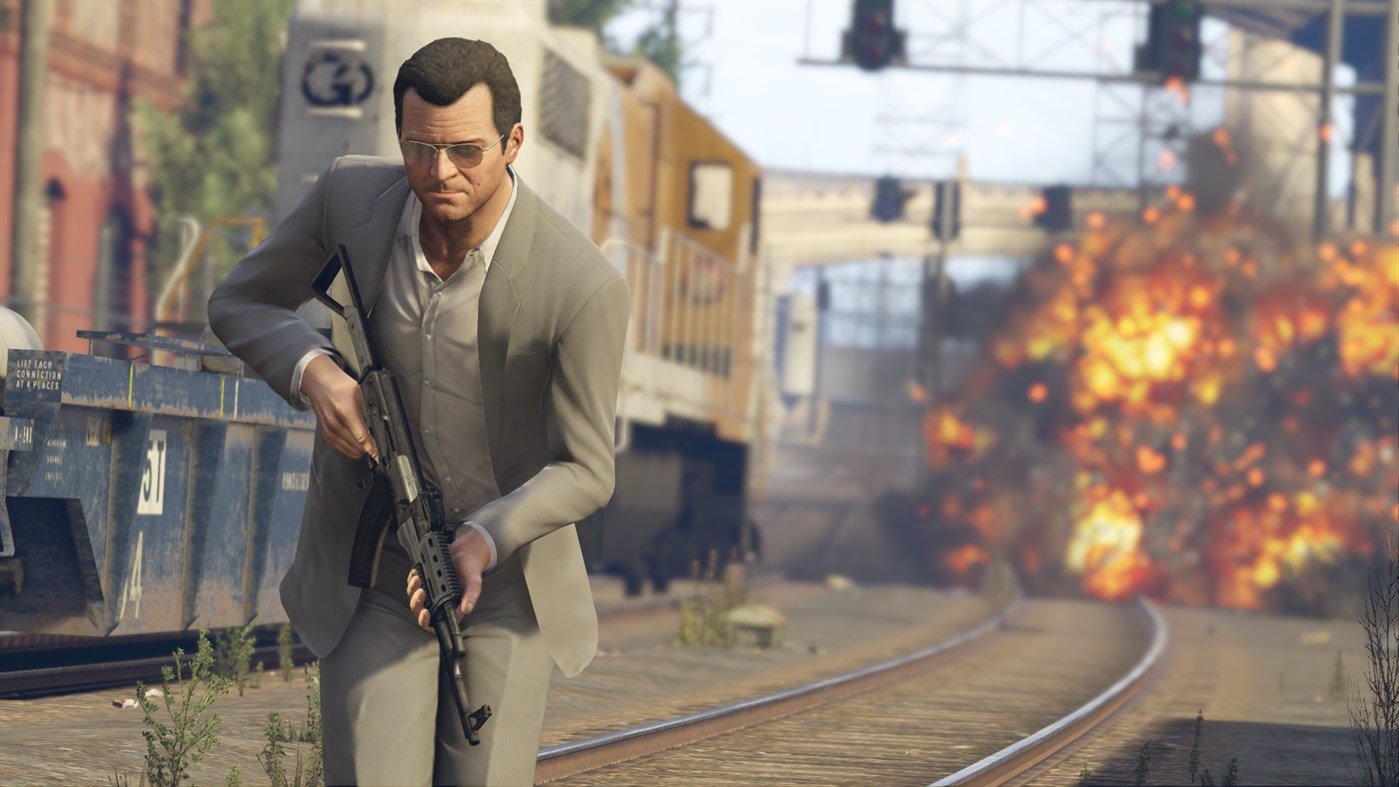 Grand Theft Auto V, also known as GTA V or GTA 5, is an open-world action-adventure video game developed by Rockstar North and published by Rockstar Games. It was first released in September 2013 for the Xbox 360 and PlayStation 3, and later for other platforms, including the Xbox One and PlayStation 4. The game is set in the fictional city of Los Santos, which is based on Los Angeles, California.

Grand Theft Auto V’s plot revolves around the lives of three main characters: Michael, Franklin, and Trevor. Michael, a retired bank robber, is pulled back into the criminal underworld by his old associates. Franklin, a young street hustler, works for Michael. Trevor, a sociopathic criminal, becomes embroiled in their schemes.

The game begins with Michael living a comfortable life in the upscale neighborhood of Rockford Hills, with a wife and two children. However, his past catches up with him when his old associates, Trevor and Brad, unexpectedly arrive at his home, forcing him to return to his criminal ways. Michael quickly becomes involved in a series of heists and schemes, as he tries to make a quick fortune and secure his family’s future.

Franklin, a young street hustler, is introduced as a friend of Michael’s son. He is working for a crooked car dealer, Simeon Yetarian, and wants to get out of the criminal life. Michael offers him a chance to work with him and he accepts. Franklin is a skilled driver and is often tasked with driving during heists.

Trevor is a violent and unpredictable criminal who is first introduced as a friend of Michael’s from the past. He is a drug-addicted, unstable individual who is always looking for a quick buck. He joins Michael and Franklin in their heists and schemes, providing muscle and firepower.

As the game progresses, the three characters begin to work together, and their relationships become more complex. Michael and Trevor have a strained relationship, as Michael tries to keep Trevor in check, while Franklin tries to mediate between the two. The game explores the themes of loyalty, trust, and betrayal, as the characters navigate the dangerous and unpredictable world of Los Santos.

The game’s story is complex and well-written, with many twists and turns that keep players engaged throughout the campaign. The characters are well-developed and relatable, and the game’s themes are thought-provoking and emotionally impactful. Players will have the opportunity to experience the different perspectives of the characters and the storyline will keep players guessing as they unfold.

The gameplay in GTA 5 is built around three main characters: Michael, Franklin, and Trevor. Each of the characters has their own unique abilities and specialties, and players can switch between them at any time.

The game’s mission structure is similar to previous GTA 5 games, with players completing various missions to advance the story and earn money. Missions are varied and can range from simple tasks such as delivering a package, to more complex and challenging tasks such as robbing a bank. The game also features a variety of side-missions and activities, such as street racing, hunting, and flying planes.

Players can interact with the world in many ways, such as driving vehicles, stealing cars, and engaging in combat. The game’s driving mechanics are realistic and offer a variety of different vehicles to choose from, including cars, motorcycles, boats, and planes. Players can also steal cars and use them to commit crimes or evade the police.

Combat in GTA 5 is also a major aspect of the gameplay. Players can use a variety of weapons, such as guns, melee weapons, and explosives, to fight against enemies. The game’s cover system allows players to take cover behind objects and use stealth to take out enemies. The game also features a wanted level system, where players can earn a higher wanted level by committing crimes, making the police more aggressive and harder to evade.

Overall, the gameplay in GTA 5 is fun, engaging and offers a huge variety of activities and missions to keep players entertained for hours. The game’s open-world nature allows players to explore the city of Los Santos and its surrounding areas in any way they want, whether it’s completing missions, engaging in street racing or just cruising around the city. The game’s realistic driving mechanics and combat system make for a challenging and immersive experience, and the online multiplayer mode offers endless hours of entertainment with friends.

The graphics in Grand Theft Auto V (GTA 5) are some of the best in the open-world genre. The game’s world, Los Santos, is incredibly detailed and realistic, with a variety of different neighborhoods that each have their own unique look and feel. The game’s characters and vehicles are also well-designed, with realistic animations and detailed textures. The game’s lighting system is also impressive, with dynamic lighting that changes with the time of day, and weather effects such as fog and rain that add to the game’s realism.

The game’s character models and animations are also noteworthy, with a high level of detail and realistic movements. The game’s physics engine is also impressive, with realistic vehicle handling, and realistic damage and destruction.

The sound in GTA 5 is also top-notch, with an excellent soundtrack that perfectly captures the game’s setting and tone. The game’s original music is composed by Tangerine Dream, Woody Jackson, The Alchemist, and Oh No, and it features a mix of different genres that fit perfectly with the game’s setting.

The game also features a wide variety of licensed tracks that can be heard on the various radio stations in the game, and they are selected to fit the game’s atmosphere, tone and the time period, these tracks are from different genres like rock, hip-hop, R&B, and electronic. The game’s voice acting is also excellent, with a talented cast of voice actors that bring the game’s characters to life.

Overall, the graphics and sound in GTA 5 are some of the best in the open-world genre, and they contribute greatly to the game’s immersive and realistic experience. The game’s world, characters, and vehicles are all well-designed, and the game’s soundtrack and sound effects are excellent and fitting for the game’s setting and tone.

GTA 5 features a wide variety of weapons for players to use throughout the game. These weapons can be divided into several categories, including handguns, rifles, shotguns, and heavy weapons.

Handguns: These are the most basic weapons in the game and are easy to obtain. They include a wide variety of pistols and revolvers, such as the Pistol, Combat Pistol, and Heavy Pistol. They are ideal for close-range combat and are effective at taking out enemies quickly.

Rifles: These weapons are more powerful than handguns and are ideal for mid-range combat. They include a wide variety of assault rifles, such as the Assault Rifle, Carbine Rifle, and Advanced Rifle. These weapons are perfect for taking out enemies from a distance, and are also effective at penetrating cover.

Shotguns: These weapons are ideal for close-range combat and are perfect for taking out enemies quickly. They include a wide variety of shotguns, such as the Pump Shotgun, Sawn-Off Shotgun, and Bullpup Shotgun. They have a high rate of fire and are also capable of penetrating cover.

Melee weapons: These weapons include a wide variety of melee weapons such as knives, crowbars, and baseball bats. They are ideal for close-range combat and are perfect for taking out enemies quickly.

In addition to these weapons, players can also customize their weapons by adding attachments such as scopes, silencers, and extended magazines. They also have access to a variety of special weapons such as sticky bombs, molotovs, and flares.

Overall, GTA 5 features a wide variety of weapons for players to use throughout the game. These weapons are well-balanced, fun to use, and make the game’s combat feel exciting and dynamic. Each weapon has its own unique characteristics and they make the players feel empowered and engaged in the game.

Grand Theft Auto V’s Online Multiplayer mode, known as GTA Online, is a separate and distinct experience from the single-player campaign. It allows players to create their own characters, form crews, and engage in various activities together in a shared online world.

When players first start playing GTA Online, they will have to create their own characters and customize their appearance, abilities, and weapons. Players can also purchase and customize their own properties, vehicles, and weapons. The game’s economy and progression system are based on earning money and reputation points, which are used to purchase new items and unlock new content.

GTA Online offers a variety of activities for players to engage in. Some of the most popular include:

GTA Online also features a variety of social and customization options, such as the ability to form crews, chat with other players, and create custom emblems and decals. The game also features regular updates and events, which add new content, features, and challenges to the game.

Overall, GTA Online offers a rich and engaging multiplayer experience that offers a variety of activities, challenges, and social options for players to enjoy with their friends. It’s a great way for players to continue their experience after finishing the single-player campaign and it keeps players engaged for hours.

In conclusion, Grand Theft Auto V, also known as GTA V or GTA 5, is an exceptional open-world game that offers players an immersive and entertaining experience. The game’s storyline is well-written and engaging, with a complex narrative that keeps players guessing as they progress through the game. The gameplay is fun and varied, offering a wide range of activities and missions for players to enjoy, from street racing and hunting to golfing and yoga. The graphics and sound are top-notch, capturing the essence of the game’s fictional city of Los Santos, which is based on Los Angeles, California.

Additionally, the game’s online multiplayer mode, GTA Online, offers an entirely new level of gameplay, allowing players to create their own characters, form crews, and engage in various activities together. This mode offers a variety of missions, races, and activities for players to enjoy with their friends. Players can also purchase and customize their own properties, vehicles and weapons.

All in all, GTA 5 is a game that offers something for everyone, from the story-driven single-player campaign to the fast-paced multiplayer action. The game’s replayability is high, and its engaging storyline, gameplay, and graphics make it an excellent choice for players of all ages and skill levels. Overall, if you’re a fan of open-world games or just looking for a fun and immersive experience, GTA 5 is definitely worth checking out

Fun on a Budget: The Top 10 Best Games for Kids Under $10 Dollars

Which are the top 10 games? “The Top 10 Most Popular Games of All Time”